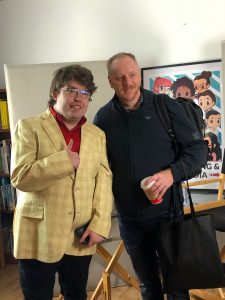 Interview with a Living Hockey Legend

Though spending the majority of his National Hockey League career with the Vancouver Canucks, Corey Hirsch has also played for teams including the New York Rangers, Washington Capitals, and Dallas Stars. He also represented Canada in men’s ice hockey for the Olympic Games in Lillehammer 1994 (Silver Medal Winner) and World Championships in 1995 Sweden (Bronze Medal Winner).

Opening Up about Mental Health

In addition to his prolific hockey career, Corey has become an outspoken advocate for mental health awareness and ending the stigma associated with mental illness. He has spoken of his own struggles with anxiety, depression, and obsessive-compulsive disorder (OCD) in the Player’s Tribune and other venues. This was the subject that Chad focused on for this interview.

In Chad’s words, “It was a huge honor and a privilege to be able to interview someone that has inspired me to get into the broadcasting field, even though I battle depression and more importantly anxiety. I just want people to know that they are not alone. Corey and I want you to chase your dreams, no matter what they are, and to end the stigma on depression and anxiety.”

You can watch the interview here. Many thanks to Corey for coming in to share his experience, and we hope it helps many others who share the same struggles.