For 25 years VanArts has been a top tier animation school, most recently ranked #2 in Canada by Animation Career Review for its' 2020 rankings. Our highly experienced faculty members are passionate about teaching the craft of character animation. Learn how to animate believable character performances with Maya for 3D or Harmony and hand drawn classical animation for the 2D program.

Check out our video highlights of our favorite animation student films & reels from 2019-2020! 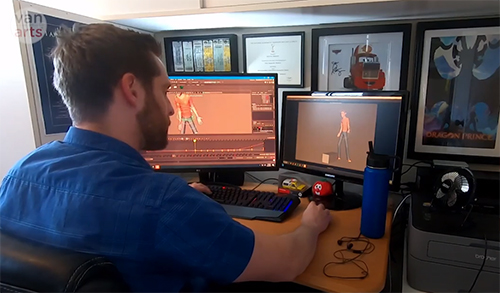 From Cars to Cartoons: An Animator’s Journey

Meet Austin Wright, a 3D Character Animation graduate from VanArts now working in the industry. Here he talks about his journey from being an auto-mechanic to an animator, enjoying work on shows such as the Emmy-Award winning DRAGON PRINCE. 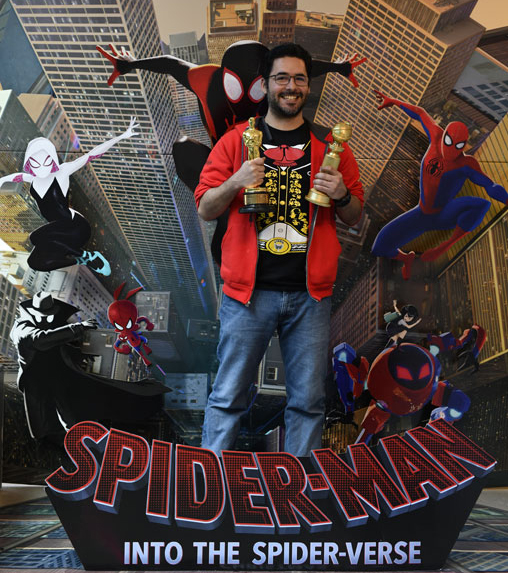 VanArts Graduates Spun Us into the Spider-Verse

A total of 9 alumni worked on the ground-breaking Spider-Man: Into the Spider-Verse at Sony Pictures Imageworks in Vancouver. One of them was Samuel Rico, who has served an an Animation Director for studios in Mexico and now animates on features such as Hotel Transylvania 3 and The Angry Birds Movie 2.

Into the Spider-Verse has been a game-changer for animated filmmaking, winning both the Golden Globe and the Academy Award for Best Animated Feature, and hard-working animators like Sam got to share in the glory! 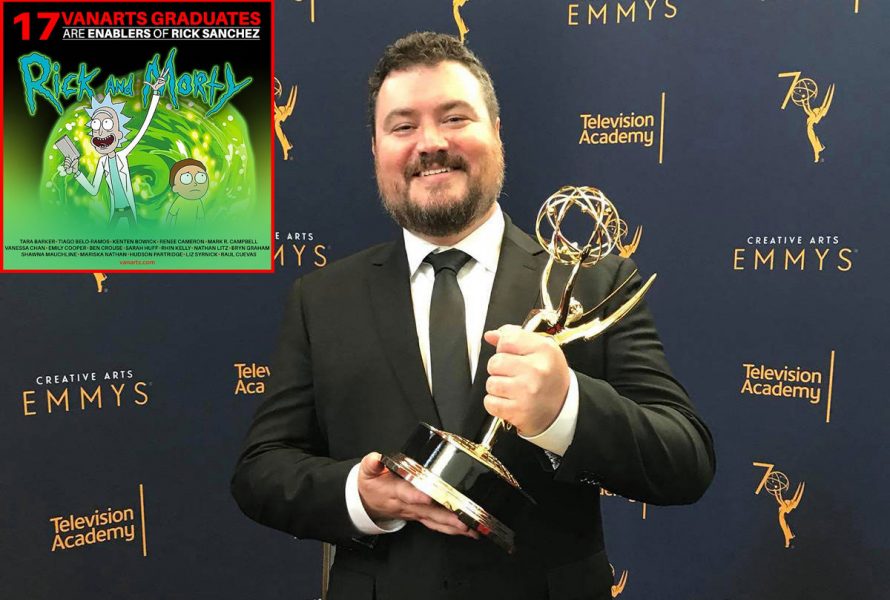 Bringing Rick and Morty to Life

The hit animated TV series Rick and Morty is produced in Vancouver at Bardel Entertainment, and many of our own animators have been a part of it, including Nathan Litz, who won this year’s Emmy for his direction on the show.

Other shows that our graduates have worked on include My Little Pony: Friendship is Magic, Hilda, The Dragon Prince, Teen Titans Go, Mega Man, 101 Dalmatian Street, Cloudy with a Chance of Meatballs, Transformers: Rescue Bots, and many, many more… 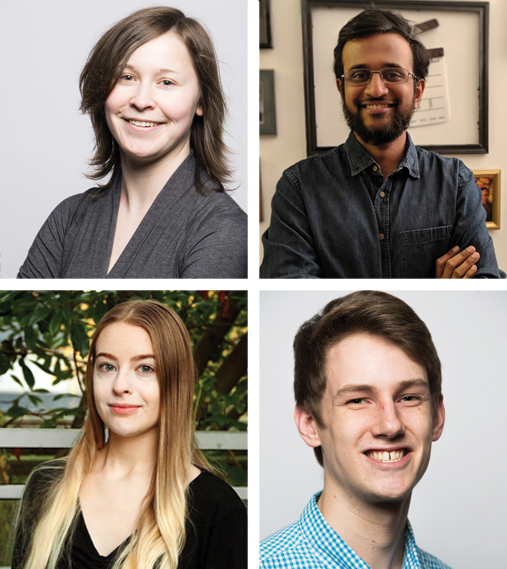 Hear what it’s like to be an animator and view their demo reels with shots from Pete the Cat, Fantastic Beasts, Deadpool, Detective Pikachu, The Jungle Book, Henchmen, Once Upon a Time, Call of the Wild, Paddington 2, Lady & the Tramp, and much more!

The first term of the year begins with the principles of animation: Initiating Force, Path of Action, Lead/Follow, Timing/Spacing, Physics and Body Mechanics. The aesthetics of a shot, psychology of line, shape, composition, lighting and colour are covered in Story/Visual Language. Life Drawing is essential for all animation students, as strong drawing skills build confidence and all animators benefit from simplified structural drawing for planning animation. 3D animators learn Maya Fundamentals in animation interface, preferences and file management, and basic modeling is introduced for creating props and environments. Photoshop is introduced to support assignments, presentations, and texturing, and the History of Animation is offered for an in-depth look at how the art form has evolved.

Acting and Performance is the focus of Term 3 animation assignments. The course takes an innovative look at ‘the animator as actor’ role. You will observe students from our Acting Department, studying their body language, timing and interaction. Dialogue, sound FX and music are introduced. In Story/Visual Language you will develop, storyboard and create assets for your Term 4 demo project. Workshops in Adobe Premiere prepare you for creating, editing and adding audio to story reels and final projects. Life Drawing advances body construction awareness and dynamic posing. The application of techniques learned in Maya 1 and 2 aid in the building of sets and character assets for the short story project.

The term is for honing Character Animation skills while creating your Character Animation demo reel. You have a choice of completing a short film, as designed and story boarded in Term 3, or completing a sequence of assignments to strengthen your skills as a character animator. Harmony classes introduce software components specific to your film project. Lighting and rendering are taught in the Maya course to help enhance the visual presentation of your demo reel project, as well as providing visual polish on previous animation assignments. Life Drawing advances body construction awareness and dynamic posing to help strengthen your animation poses. You also explore artistic expression through line and proportion.

Check out our Animation Playlist on YouTube for samples of student films & demo reels.

Wayne Gilbert has worked in the industry for 35+ years on films ranging from Star Wars to Care Bears, including Rock and Rule, The Mummy 2, Pilsbury Doughboy commercials, 7 TV specials and video games Bounty Hunter, Skate and Skate 2.  His credits include Sr. Animation Director, Sr. Lead Animator and Art Director having worked at studios such as Nelvana, ILM (Industrial Light & Magic), Walt Disney Canada and EA Black Box. Wayne has lectured internationally at post-secondary schools and professional venues, won 2 Clio Awards, created 5 animated short films (including the award-winning Let Go), and has authored 3 books (including Simplified Drawing for Planning Animation). His personal work is focused on writing and story development for film. www.anamie.com IMDB 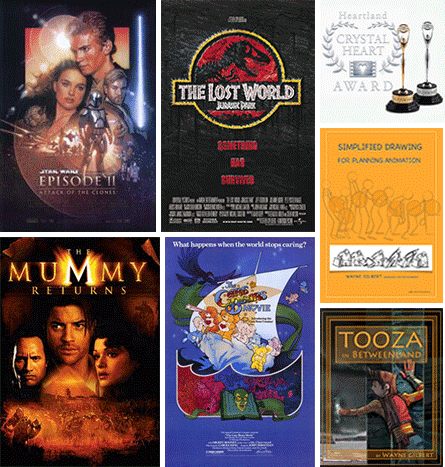 Charles is an accomplished animator, historian and certified Harmony Instructor, who studied film-making at John Abbott College’s Creative Arts Program in Montreal in the early 1980s and also attended the Sheridan College Classical Animation Program in Oakville, Ontario. His many credits for television series and commercials were earned at studios in Montreal and Toronto, and on various independent projects in Vancouver. His eclectic background includes experience in radio broadcasting, as well as comic book and anime wholesale distribution. Charles is a cornerstone of the school, having initially worked underneath Lee Mishkin, Academy-Award winning founder of VanArts‘ Classical Animation Program.

Carlos has been in the animation field for about 20 years and has been part of large teams of artists at places like Walt Disney Feature Animation, Core Feature Animation, Digital Domain, EA, Bioware, Arc Productions and Mr. X. He’s had experience doing 2d traditional Animation, character animation, motion capture, game cinematics for AAA game titles such as Dragon Age and Mass Effect, as well as creature animation for various feature films and TV series. His list of credits include Disney’s Tarzan, Lilo And Stitch, Brother Bear, Mulan, Emperor’s New Groove, My Super Ex-Girlfriend, The Wild, Guillermo Del Toro’s Oscar-winning The Shape of Water among many others. His career has taken him from Toronto, Ontario to Orlando Florida to LA, Edmonton Alberta and finally to Vancouver BC. He graduated from Sheridan College, having completed the Traditional Animation Program, studied Design at University of Costa Rica and at Seneca College, as well as taking computer training at OCAD. He enjoys playing a little classical guitar and the occasional game of table tennis.

David is a graduate from the early days of the Vancouver Film School. He’s worked for companies such as Rainmaker, Bardel, Heavy Iron Studios, Relic Entertainment, EA, Disney Interactive, and Sony Animation. David began his career on some of the very first CGI-animated television shows, such as Reboot, Beast Wars, and War Planets. At THQ, he worked on Sponge Bob SquarePants, the Dawn of War series, and Space Marine games. David supervised and directed the animation for the award-winning Company of Heroes series, the number one highest-rated real-time strategy game of all time. Returning to TV and film, he worked on Escape from Planet Earth, Ratchet and Clank, Open Season, Scared Silly, Surfs Up 2, as well as Imaginary Mary and number of the Barbie/Mattel DVDs. Born in Vancouver, he has a passion for west coast camping and is an avid angler, fishing from Vancouver Island to Haida Gwaii.

For over 25 years Kevin enjoyed a career as an illustrator & graphic designer in Edmonton, AB holding senior positions at several local software and design studios and eventually operating his own design studio and business for over a decade.

A decision to follow his true passion for animation led him to the West Coast and is a graduate of the 3D Character Animation program at VanArts. Immediately after graduating, he started his career as an animator at Rainmaker Entertainment (now Mainframe Studios). Quickly rising to the position of Lead Animator, he has worked on several award-nominated TV series from Bob the Builder (including the European theatrical release “Bob the Builder and the Mega Machines”), the Netflix series SpyKids: Mission Critical and Barbie: Dreamhouse Adventures, along with the Kids Screen award-nominated series for DreamWorks TV Animation – Madagascar: A Little Wild.

Kevin continues to work at Mainframe now as Animation Director for the Mattel Series We Are Barbie for Netflix. Outside of animation he’s an avid sports enthusiast with a love for the “beautiful game” of football (soccer here in Canada) but anything to keep active. Illustration and watercolour painting are still passions to be pursued when not keeping up with his busy teen-age children’s activities.

Scott has been a media producer, consultant and instructor since 1997.  Most recently he has worked with Identify Photo on a number of video productions as a producer and sound engineer for non-profit organizations and is an active musician and entertainer. Scott’s work experience also includes many years with the Gulf Islands Film & Television School as 3D Animation program manager, soundtrack composer, video mentor and co-producer of the school’s official YouTube Channel launch. He has developed websites, print materials and produced animation for his award-winning short Frog Song, the documentary Contact the People (2002 Sundance Film Festival premiere), plus sound design for Lisa Jackson’s NFB short Suckerfish and Richard Reeves’ camera-less animated film 1:1.

Thomaz Magno has been drawing professionally since 2006, starting as a graphic designer in Brazil.
In 2010 he moved to Canada to pursue a career in animation, and here in Vancouver he has worked full-time for animation studios such as Icon Creative, Titmouse, and Atomic Cartoons as a designer and concept artist.
He has participated in traditional live painting and online competitive digital speed painting forums,
illustrated two published novels, works on sculpting in clay and VR, and freelances from his home studio working on concepts for clients like Framestore NY and Spark Animation.

We are the go-to school for training in industry-standard softwares MAYA for 3D and Toon Boom's HARMONY for 2D, with students in the 2D stream using modern 19-inch Yiynova tablets.

Animation courses in story, visual language and life drawing support your development as a character animator, all guided by award-winning faculty with experience working at studios such as Disney, Dreamworks and Industrial Light & Magic.

VanArts has articulation agreements in place with several well established universities/colleges in Canada, the USA, Australia, New Zealand and the UK. These degree pathways allow you to complete your bachelor’s degree in as little as one year after your studies at VanArts. This gives you the advantage of two credentials; a professional diploma and an undergraduate degree. These partnerships may not only save you money in tuition cost, but allows you to transition easily from VanArts to the partner institution while continuing your educational pathway in your chosen field of study. For international students, completing your BA degree in as little as two years of additional study with our local university partners provides you with the option to apply for a Canadian work permit, which may lead to permanent residency or Canadian citizenship. This list represents the pathways, universities and specific degrees available for graduates of 2D/3D Character Animation at VanArts:

You need only a sketchbook, notebook, and pencils for the first week of classes.

*These are estimates only and assume that no required supplies or equipment are currently owned.