VanArts Brings TRON Back to the Big Screen

It's opening weekend for TRON: Legacy, one of the most anticipated movies of the year. The original TRON in 1982 was an important breakthrough for computer graphics in feature films, and a historical milestone for many of the industries VanArts trains for. Coming full circle nearly 30 years later with a new updated vision of the film, VanArts is proud to have several staff & grads who worked on it.

Carlos Guillèn, Paco Castillo and Daniel Gonzalez from Mexico, pictured below, were all in the same class of our Visual Effects Diploma Program that graduated in 2009. The 3 of them are now working at Ollin Studios in Mexico City. In addition to all of them working on TRON: Legacy as digital compositors, they have also worked on recent films such as Let Me In and The Social Network. 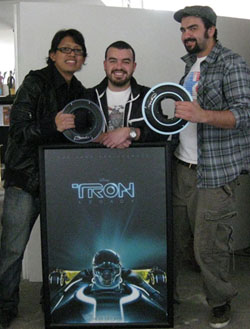 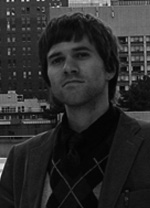 Milan Schere graduated from our Visual Effects Diploma Program in 2007, and worked on TRON: Legacy as a digital matte painter at Mr. X Studio in Toronto. After graduation, Milan married his VanArts classmate Seema Jogoo, and they have both since worked for many studios on countless productions. In addition to their career success, we got the news this week that Milan and Seema just welcomed their first baby boy, Keanu Schere, into the world on December 9th!  Congratulations to the whole family! 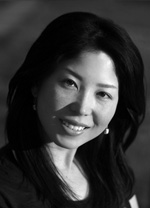 Reika Nishio graduated from our 3D Animation Diploma Program in 2007 and soon afterwards has worked on numerous other films and TV series such as The Last Airbender, The Losers, Invictus, Angels & Demons, the Twilight series, and TRON: Legacy as a 3D integration/tracking artist.

Reika shares with us, "VanArts taught me not only software and techniques, but also how to be an independent artist as well as a team member.  It was the school's studio-like atmosphere where I learned how to receive critiques and address them."

Another graduate (not pictured here) who worked on TRON: Legacy is Lionel Heath, a graduate from our first Visual Effects class in 2005, who has also worked on nearly 30 titles throughout his career, including The Dark Knight, Angels & Demons, Hellboy II: The Golden Army, and 3 of the Harry Potter films.

Check out Lionel's full list of credits at IMDB.

Our instructors who have worked on TRON: Legacy: 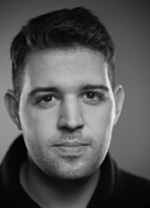 Chris Van Dyck has taught advanced compositing in our Visual Effects Diploma Program. As a Vancouver-based VFX artist in the commercial, film and television industry, he has worked at some of the top studios around the world and worked on films such as Superman Returns, 300, Ironman, Harry Potter and the Half-Blood Prince and many others. Currently he owns and operates a boutique-style studio based in Gastown called Faction Creative. 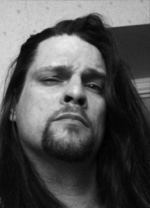 Gideon Hay teaches sculpture in our Game Art & Design Diploma Program. Gideon has been sculpting for the entertainment industry since 1993. He sculpted maquettes not only for the new TRON film but also the video game TRON: Evolution. Other video game, film and TV credits include Night at the Museum 2, Turok: Son of Stone, Twilight: Eclipse, and dozens of other high profile and independent projects. His extensive portfolio can be viewed at his website: www.gideonhay.com

See Gideon Hay in action working with our students in Episode 2 of our "Inside VanArts" web video series. 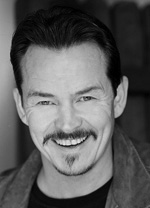 Brent Stait teaches advanced scene study classes in our Acting for Film & TV Diploma Program and part-time acting courses, and played a role in TRON: Legacy in the Purple Gaming Program. Brent has been acting in film, television and theater in Canada for the past 30 years.  From X-Files to Mystery, Alaska, from serial killers to priests, Brent has performed a large number of character parts on film and stage.  A graduate of Ryerson Theater School and Banff School of Fine Arts MasterClass, Brent has been the recipient of a Tyrone Gutheri award, a Leo award, and has been nominated for a Genie.

Congratulations and thank you to all in our VanArts family who contributed to this new feature film! We look forward to seeing your efforts on the big screen this holiday season and watching your careers continue to unfold!