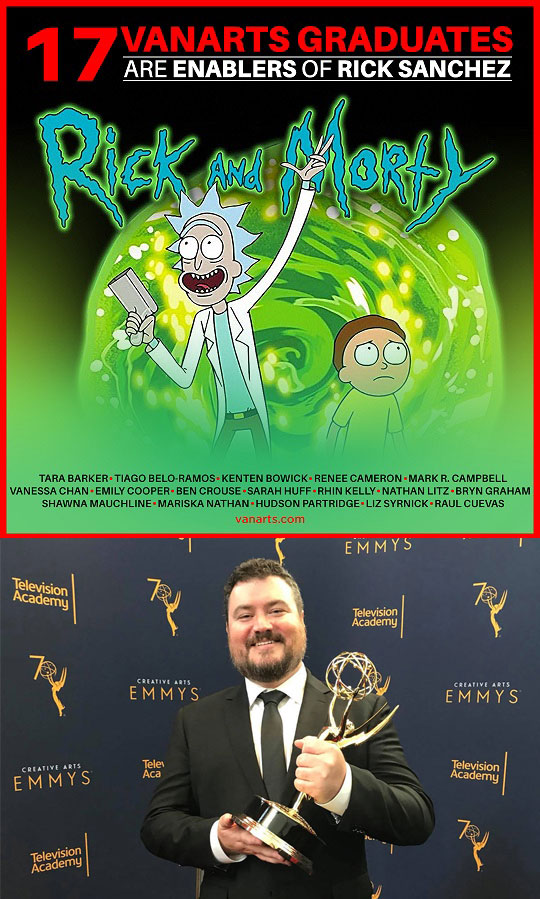 VanArts is proud to give a shout-out to our own alumnus Nathan Litz for taking home a second Emmy Award for his work on Adult Swim’s Rick and Morty.

Nathan won as Animation Director in 2018 for the episode Pickle Rick, and in 2020 as Director of The Vat of Acid Episode. He has been working on the show at Bardel Entertainment in Vancouver since 2011.

A native of Cranbrook BC, Nathan first came to VanArts in 1999 while he was still in high school, taking our 1-month Classical Animation Summer Intensive along with his friend and classmate Chris Woods. Now bit by the animation bug, Nathan and Chris both enrolled at VanArts after high school to study full-time in our one-year program, and both have worked in the industry ever since. Chris has become an animation director as well, working on shows like Teenage Mutant Ninja Turtles, also for Bardel.

Nathan’s credit list working for nearly 18 years in animation includes shows such as Jacob Two-Two, Atomic Betty, Edgar & Ellen, The Simpsons, Teen Titans Go, Rainbow Butterfly Unicorn Kitty, and of course the beloved Rick and Morty. At least 17 other graduates of VanArts have worked on the Emmy-award winning series under Nathan’s skillful direction.

For more on Nathan’s career, check out this interview with Bardel Entertainment and this article from his home town of Cranbrook.

Congratulations Nathan! VanArts is proud to have played a part in starting your illustrious career!