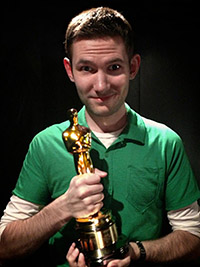 The Oscars are upon us, and VanArts is rooting for our alumni in Animation and Visual Effects who have contributed to several of this year’s nominated feature films.

Pictured here is VanArts Animation Graduate Blaine Toderian, who got to hold the 2013 Oscar for Best Visual Effects on LIFE OF PI, one of the feature films he worked on at MPC. Today, Blaine is a Senior Animator at Industrial Light & Magic, and most recently contributed visual effects to THE REVENANT.

In Blaine’s own words, “At VanArts I was introduced to the essential principles needed to animate characters with believability, and I’m thankful for training I received there.”

Here is our full list of VanArts grads who worked on this year’s nominees:

Good luck to our grads on Awards Night (February 28)!

Want to see your name in the movies?