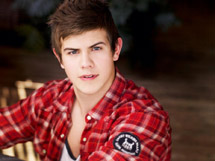 The William Davis Centre for Actors’ Study at VanArts is very proud of our graduate Andrew Herr, who is starring in his first leading film role airing at 8pm this Sunday, April 28 on CBC.

Andrew plays the role of Mark Howe in the new TV movie for CBC Mr. Hockey: The Gordie Howe Story, an experience which enabled him to combine acting with his background playing Junior B hockey. He gained immense experience working under the enthusiastic direction of Andy Mikita and several other talented actors such as Michael Shanks, Kathleen Robertson, Lochlyn Munro, Martin Cummins, Brad Turner, Teach Grant, and the rest of his cast. 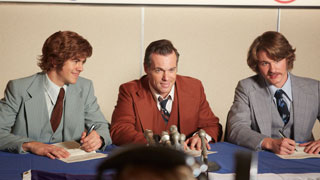 Andrew (on left) shares with us about his experience, “Hitting the ground running on my first film role coming out of school, I really got to see how a film comes together in addition to the acting, which was amazing. Working with the director Andy was great because his enthusiasm for the project was contagious, and I felt I could always ask him questions and stay on the same page. Working with the other actors was a great experience and wonderful to see how they approach the craft. My first time playing hockey in vintage gear from the 1970s was a challenge, but overall it was a lot of fun.  It was a dream to start my career with such an experience, one I will never forget.”

About his training at VanArts, “The Acting Department at VanArts helped me learn and use all the tools necessary to work as an actor. As a school they pushed me beyond my comfort zone to find ways of working the craft continually, even outside the classroom. The teachers were incredibly encouraging and there was a level of trust that allowed me as a performer to take more risks and then form it into a habit. The tools VanArts taught me I will continue to work on and use for the rest of my life.”