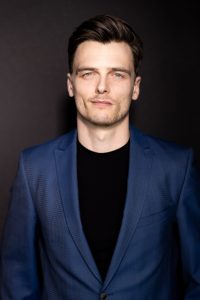 VanArts was excited to hear the news from our own 2014 graduate in Acting for Film & Television Thomas Nicholson, that his most recent starring role was playing a young David Bowie in an episode of DC’s Legends of Tomorrow for the CW Network. Being a fan of the legendary performing artist himself, Thomas had a blast working with audition coaches, researching Bowie’s mannerisms, and taking to heart what he learned at VanArts, in order to do the Starman justice on the screen.

This role was only the latest highlight for Thomas’ career, as since graduating he has also enjoyed a steady flow of acting gigs, ranging from short films to recurring & guest star roles on shows like Damnation, The X-Files, Supernatural, The 100, The Terror, Project Blue Book, The Haunting of Bly Manor, Virgin River, Trigger Me, and many more.

We sat down with Thomas and documented the story of his acting career to-date, and how VanArts helped him prepare for a career that he loves.

If you’re inspired by Thomas’ story, contact us today about how to apply for our next Acting class. The full-time program starts next on September 7th, 2021 and now is the time to apply.