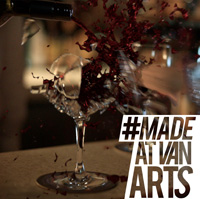 Careers in Visual Effects are booming in Vancouver, and Danish VanArts graduate Jesper Rahlff is one of many ambitious creatives who are now an active part of it.

While pursuing general 3D studies in Denmark, Jesper read an article featuring then-VP of Production at Sony Pictures Imageworks Jason Dowdeswell and their work on THE AMAZING SPIDER-MAN at Vancouver’s studio. This inspired Jesper to seek out schools here, and after coming in to audit classes at VanArts, joined our Visual Effects program last fall. Upon graduation, he was interviewed by none other than Dowdeswell himself, now Head of Production at Vancouver’s FuseFX – and got hired!

Hear Jesper’s full story and see his work in this special exclusive video:

To hear about more grads whose careers were #MadeAtVanArts, follow our hashtag – or better yet, come in and audit a class!