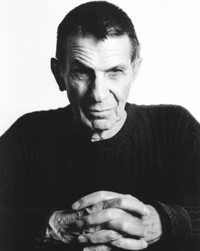 Last week, we were saddened to learn of the passing of Leonard Nimoy. Many faculty members have fond memories of watching Nimoy’s Spock in the original Star Trek series many years ago. In fact, Nimoy portrayed the character so well, that Spock remains a pop culture icon even to generations who didn’t grow up watching him on the small screen. But aside from his contribution to popular culture, Nimoy gave so much to the arts. Though some of our current and future students may not realize it, Nimoy inspired and will continue to inspire many in the visual and media arts. Apart from acting, Nimoy directly contributed to the arts as a photographer, acting teacher, director, and voice-over artist for a number of video games.
Acting
Early in his career, Nimoy did not experience sweeping successes. In fact, his first twelve years of acting consisted in four parts in movies that didn’t get much notice and a number of minor roles in shows such as Bonanza and The Twilight Zone. During these years, Nimoy established his own acting studio where he taught budding actors for three years.
It was while appearing in The Man from U.N.C.L.E that Nimoy first met and worked with William Shatner. The two landed their roles in Star Trek in 1966 and it was in his role as Spock that Nimoy really flourished. He came up with the Vulcan Nerve Pinch and the Vulcan Salute. In fact, Spock was so popular that he often overshadowed the lead show’s lead character, Captain Kirk. His portrayal of Spock earned Nimoy an Emmy nomination. Unfortunately, the show was cancelled after just three seasons as a result of poor ratings.
That wasn’t the end of Nimoy’s journey with the Star Trek franchise. He reprised his role in Star Trek: The Animated Series, Star Trek: The Next Generation, and the first six Star Trek movies—two of which he also directed. More recently, he appeared as the original Spock in the J.J. Abrams movies: Star Trek and Star Trek Into Darkness. And on a related note, VanCity Buzz tells us the next Star Trek movie will be shot right here in Vancouver!
Photography
In addition to being a talented actor, Leonard Nimoy was also an accomplished photographer. In fact, he spent more of his life behind the camera than in front of it. He became interested in photography as a child and after his roles in Star Trek and Mission: Impossible he studied photography at UCLA and considered changing careers.
Beginning in the 1970’s, Nimoy undertook a number of projects in photography and created several collections, mainly focusing on the human form. Throughout his career as a photographer, he shot many nudes and demonstrated that beauty comes in many different shapes and sizes. His work has inspired photographers as much as his acting roles have inspired actors. 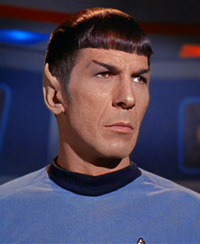 Video Game Art and Design
While Star Trek was a pioneer in the science fiction genre and continues to inspire visual arts projects (including game art and design) to this day, Nimoy contributed to the gaming industry in more tangible ways. He lent his voice to a number of games, helping to bring them to life. He voiced parts in Seaman, Side Meier’s Civilization IV, and Star Trek games, such as Star Trek: 35th Anniversary Enhanced and Star Trek: Online. He was such an inspiration to the industry that a number of game creators, including the creators of Star Trek: Online, will honour him in their games for his contribution and inspiration.
Indirectly, Nimoy has inspired many from different walks of life and in a variety of industries. Certainly, the Star Trek franchise has inspired the visual arts from animation, to VFX, to acting and directing to boldly go where no man has gone before. But Nimoy inspired so many more—astronaut Buzz Aldrin was quoted as calling him “a fellow space traveler because he helped make the journey into the final frontier accessible to us all.” We hope that as fellow visual and media artists, we can continue to draw inspiration from his work and to continue reaching for the final frontier.