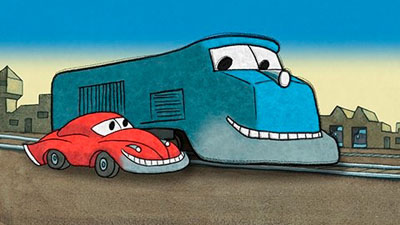 The latest addition to BigFott's filmography is I'm Fast! based on the childrens' book of the same name by Kate & Jim McMullan. The new film features the voice of award-winning actor Stanley Tucci, and features animation by VanArts' own Galen Fott, Kevin Yowell, Ken Priebe and Micah Baker.  These animators have contributed to many other short films for BigFott over the years, since Galen founded his studio soon after graduation from VanArts.

Another new BigFott release for Scholastic/Weston Woods is Scaredy Squirrel Makes a Friend, based on the childrens' book by Melanie Watt. Adapted & directed by Galen Fott with character animation by VanArts instructor & communications director Ken Priebe, this film was deemed a "2013 Notable Children's Video" by the American Library Assocation.

Visit the official pages for I'm Fast! and Scaredy Squirrel Makes a Friend at the BigFott Studios website, including trailers, links for the production artists and ordering the films on DVD: bigfott.com/animated_films